Icky sicky ick.
Posted by Storm Faerywolf at 3:57 AM 2 comments:

This is just a quick note to let you know that the online store at www.FeriTradition.Org is now up and running! Now you can buy Feri books, Feri art, and Feri altar tools, created by Chas Bogan, myself, and other initiates of our tradition. We will be adding to this collection as time goes on. For now, check out our selection of books by the Andersons, Anaar, Thorn Coyle, and myself, as well as our Ouija-style Witch-Boards, devotional statuary, porcelain amulets, and altar pentacles/patens. 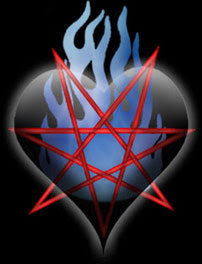 If you have any questions, or would like to commission a special piece, please email orders@faerywolf.com

Posted by Storm Faerywolf at 8:33 AM 4 comments:

Hot off the presses!

After a long road, fraught with technical and financial challenges, Witch Eye has emerged from the chaos better than it was before! I am proud to present the New and Improved:

The Winged Serpent: Seeing the Divine Twins
Lilith: Lost Goddess of Feri, Pt. 1
Close Encounters of the Green Kind
Our Faith Has No Hell: A Cleansing Ritual with Melek Tawus
The Gods of Infinity: The Lemniscate and its Presence in Feri Magick
Astarte: The Divinity of Sex
Light for the Gods: The Art of Candle Magick
Modern Queer Mythology: The Divine Twins

As well as the usual art, poetry, reviews, humor, and MORE!

When I took over Witch Eye one of the first things I did was to increase the number of pages… and so by increasing the total by eight over the previous average we now offer a 52 page Zine… but wait! There’s more…

Remember the ‘olden days’ when Witch Eye had only a B&W interior? Well, those days are over and now we can boast COLOR and lots of it! This issue has some beautiful full-color art gracing its pages, a trend that I hope to continue.

Witch Eye is made possible by the creative efforts of people like YOU. We always welcome submissions from F(a)eri(e) folks (initiates, students, seekers, and other interested people) and while we now have a “Spotlight theme” for each issue (issue #11 will be “Secrecy in the Craft”) all submissions are equally welcome. If you have an idea for a piece, but aren’t sure about it, why not ask us? Contributors receive a free copy of the issue in which their work appears. Submission guidelines can be found at www.feritradition.org/witcheye/submissions.htm

ORDERING INFO:
Issues are $8 each (Shipping in the U.S. is FREE! International customers please contact us for shipping rates to your country), check or MO payable to “Faerywolf” and send to:

Orders may also be paid with credit card (via PayPal) by using the shopping cart on our website: www.feritradition.org/witcheye

If you have any questions, please direct them to witcheye@feritradition.org or by sending a SASE to our PO box.
Posted by Storm Faerywolf at 4:40 PM 5 comments:

I have posted a new essay on my site: How To Dispel a Curse

...and for those interested, I have also updated my class schedule. This Summer I will be offering a 2-year foundational class in the Feri tradition of Witchcraft.

Level One:
2 Year class to begin
Summer 2005
(Exact dates to be determined based on student availability.)

Class size is limited.
A non-refundable deposit of $60 required to hold your space.

This foundational class deals with the establishment of a basic Feri spiritual practice.

Classes are held in my private home in Antioch, CA.
To enroll, send an application
along with a cover letter and SASE to:

Applicants will be contacted to set-up an interview.

For more information about my other Feri Classes,
please send me an email or write to the address above.
Be sure to include a SASE if you require a reply.

* Based on your situation, work-trade is also available.

Through the magic of BitTorrent I have just aquired the very first episode of the brand new Doctor Who which will premiere in the UK later this month.

Apparently it was leaked out onto the internet a few days ago. I always hear about this sort of stuff after the fact, but this is the first time that I've ever taken advantage of it. I'm extra glad for two reasons:

From what I understand it's a "rough" version, meaning that there will be some finishing touches on the final release. But that's fine by me. I'm excited to see it no matter what. Joining Chas and Daniel, my best-friend David, will be coming over later this evening to watch with me. We've both been Who-geeks since back in the day, and in fact it was our mutual interest in the travells of the Timelord that started our friendship over 20 years ago.

And for those interested, I will be buying the DVD set when it is finally released, so I'm not ripping anyone off. They will certainly see my money. And probably lots of it. J
Posted by Storm Faerywolf at 6:17 AM No comments:

Type your username here to find out what interests it suggests for you.

coded by ixwin
Find out more
Posted by Storm Faerywolf at 5:39 AM No comments:

What have I been up to, lately? Well… let’s see. Kinda long, so it's behind a cut-tag.

I recently celebrated my 34th birthday (on the 4th). The night before I started coming down with a cold, which sucks, ‘cause I had all these delicious plans. Delicious because they mostly involved food and drink. But I didn’t let a little thing like a cold stop me. Oh no! My mom came out to visit me in the afternoon, shortly thereafter followed by my sister and best-friend, David. We went out to lunch at Johnny Carino’s, which if you haven’t gone to one yet, then please stop reading this and do it now. I recommend the Chicken Milano or their homemade lasagna. And desserts? Don’t get me started on their desserts. Mmmm… so tasty. We ate too much and drank a bit (which was an odd experience, considering I was on DayQuil at the time). My sister had a bit of a cold as well, so we were both loopy on a drink and cold medicine. Good times!

After eating a bit too much, we decided to make our way home to recover and to wait for Daniel (nullzeit) to get off work because then the real plans would begin. We had late reservations at Schooner’s (home of the best f---ing nachos ever as well as the ever popular Gilroy Garlic Fries™. Oh! And Long Island Iced Teas. Lots of ‘em. Delicious. My sisters boyfriend joined us for the evening too, which was nice, and since it was after Chas’ mom went to bed, he was able to come along too. It’s always nice when your husband can join in for those little things. J

I made out like a bandit this year. From Chas (chas_bogan), a beautiful peacock shelf from the Design Toscano catalogue that will now serve as my eastern Blue God altar in my temple room. From Daniel, a great hardcover book of the cartoons of Chas Addams, creator of the Addam’s Family. He also got me a delicious looking dark chocolate and raspberry candy bar. I got some candles and some other candy from my sister, and a booklight from my mom-in-not-law. David got me an Amazon gift certificate, which was promptly spent. My mother went crazy (as usual) and bought me a portable art studio (a 106 piece wooden carrying-case that has oil/watercolor/acrylic paints, brushes, colored pencils, pastels, a wooden palate, a palate knife, and more, along with an adjustable easel built right in to the case). The next day she took me out to breakfast and we stopped by a couple bookstores where she got me a few books I had my eye on. Go mom! J

Ryan (darthjarjar) came over on Sunday to spend the night. We had a lot of fun making dinner (soft tacos) and watching the fun yet stupid Chronicles of Riddick. Oh well… cross that one of my NetFlix list. (Which reminds me… anyone else here on NetFlix? Let’s be NetFlix Friends!) J

The next morning, I made French Toast, and Daniel nuked some delicious pre-packaged bacon. Chas made mimosas for the mimosa-inclined, and we watched Foster’s Home for Imaginary Friends. Daniel and Ryan worked on their DJ stuff after that and I got some work done

Last night I went out with Chas to Death Guild, where we met up with Daniel and Ryan. There was some angst going on when we arrived which kinda started to poison our evening making me withdraw a bit more than usual. Chas kept talking about how much he was craving a cigarette and so, which my dysfunctional encouragement, he went off to buy a pack for us. (Big mistake as I am getting over a cold and today my lungs are paying for it.) While we were in the middle of some of this silly angsty feeling, our old friend Thom (f8) showed up out of the blue. He had missed his bus nearby and decided that we would probably be around. He convinced the doorman to let him in to the club just to retrieve us and we stood outside and chatted for awhile. It was so good to see him and to hear what he is up to.

After Thom left to catch his back-up bus, we went inside where I immediately saw the semi-famous Thorn Coyle (yezida). Well, actually she saw me first. We hung out like well-dressed wallflowers for a bit, then she went and danced while I took it all in. (I wasn’t really in the mood to dance, for some reason.) We talked a lot of life, the Feri tradition, her crazy and needed teaching schedule, and my own decision to start a Feri class soon. The music was so loud (it is a dance club, after all) I was starting to get hoarse and so I hope that she and I can find another, quieter venue to sit down and talk in sometime soon. We did make a deal with the Goddess that we would dance to whatever the next song was… to which I reminded her that the Goddess has a sense of humor. The next song came… nothing I knew and nothing I would consider at all “good”. We joined the ranks of the dancing, and did so for about 30 seconds. “We never said how LONG we would dance for,” she said. Indeed! I ended the evening by finding Starr (pulsar_glitch) and giving her the Cadbury Mini-Eggs that she so desires this season. She squealed and wiggled, which was pretty much the reaction that was expected and that I was going for! Here’s for pretty goth-chicks wiggling! J

Well that pretty much brings us up to the present day. Hopefully I’ll actually update this thing with some regularity soon.

Posted by Storm Faerywolf at 5:13 AM 4 comments:

Excellent work, you've passed the quiz perfectly/near perfectly. Congratulate yourself, you actually know more than 70% of the pagan community.
Posted by Storm Faerywolf at 4:41 AM 1 comment: 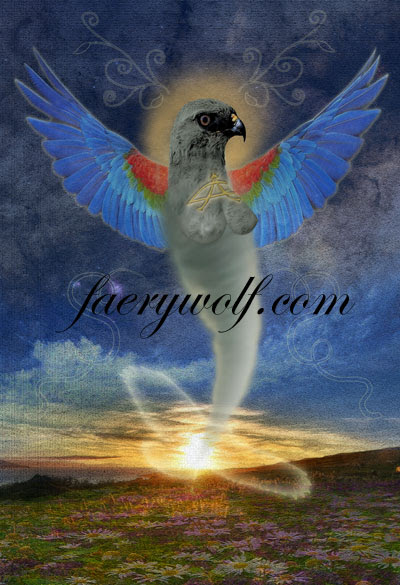